The South African Safari of My Dreams 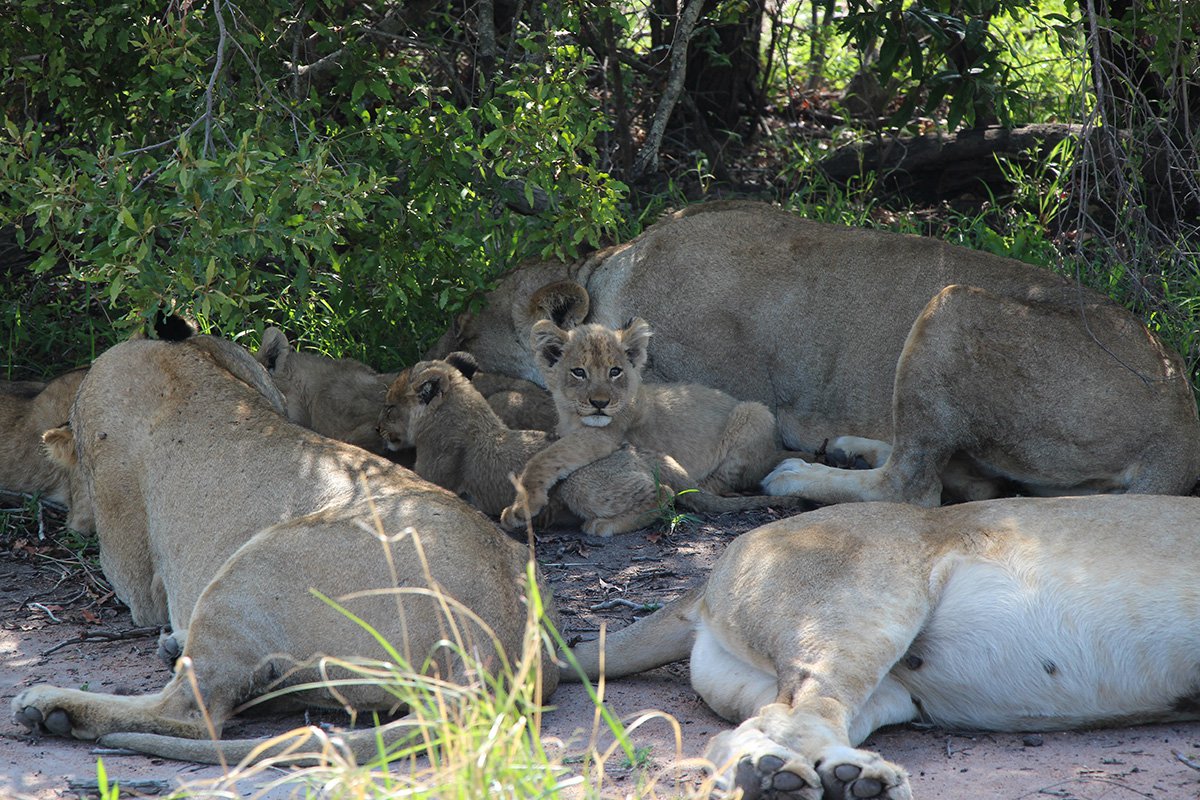 Going on a safari is a bucket list trip for many, including Fathom senior editor Berit Baugher, who is fresh off a stay at one of South Africa’s dreamiest lodges.

SABI SAND PRIVATE GAME RESERVE, South Africa – Growing up, I never really dreamt about having a big wedding, but always knew that I wanted to go on an African safari for my honeymoon. It started around the time I was fourteen when the idea of a husband felt totally abstract and I was assigned to a certain seventh-grade homeroom teacher. This particular teacher, who taught science at my small Connecticut day school, was a bit of a celebrity around campus. Along with the traditional middle-school-sized desks and chairs, his classroom was filled with an assortment of living, breathing African creatures that ranged from small spiders and garden snakes to poisonous tarantulas and a boa constrictor. The classroom pet was a two-foot-long Nile monitor named Montezuma who spent most of his time lazily sunning on a window ledge. On occasion, my teacher’s friend would bring a small monkey to our classroom and we’d sit patiently, eagerly awaiting our turn to hold him. Another friend had a baby crocodile. 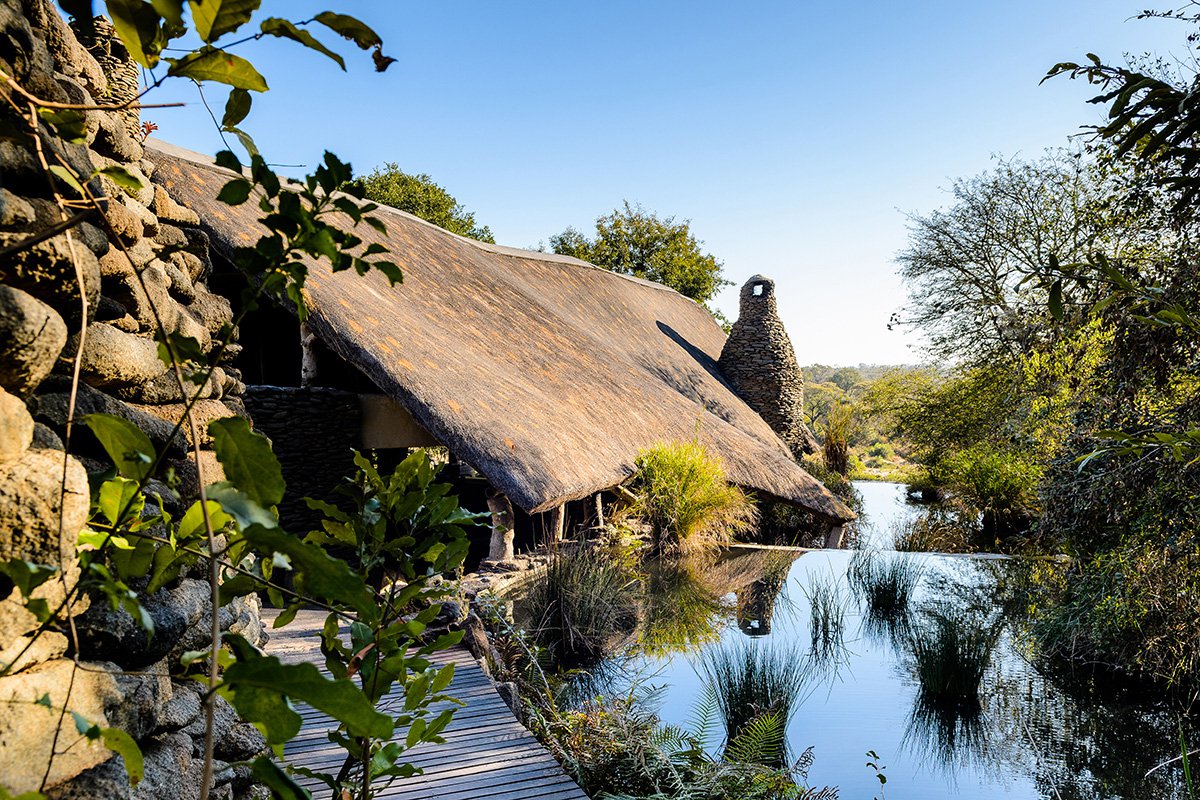 The exterior of Singita Boulders Lodge. Photo courtesy of Singita. 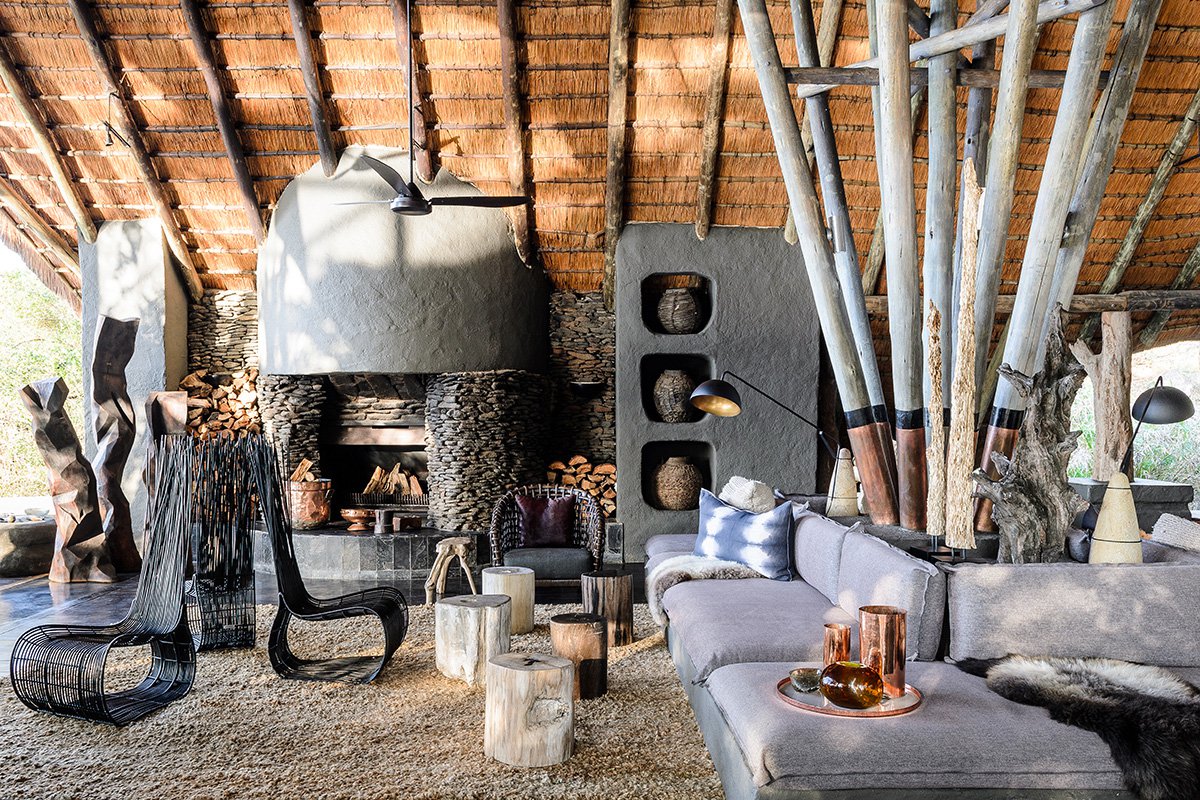 The lobby. Photo courtesy of Singita. 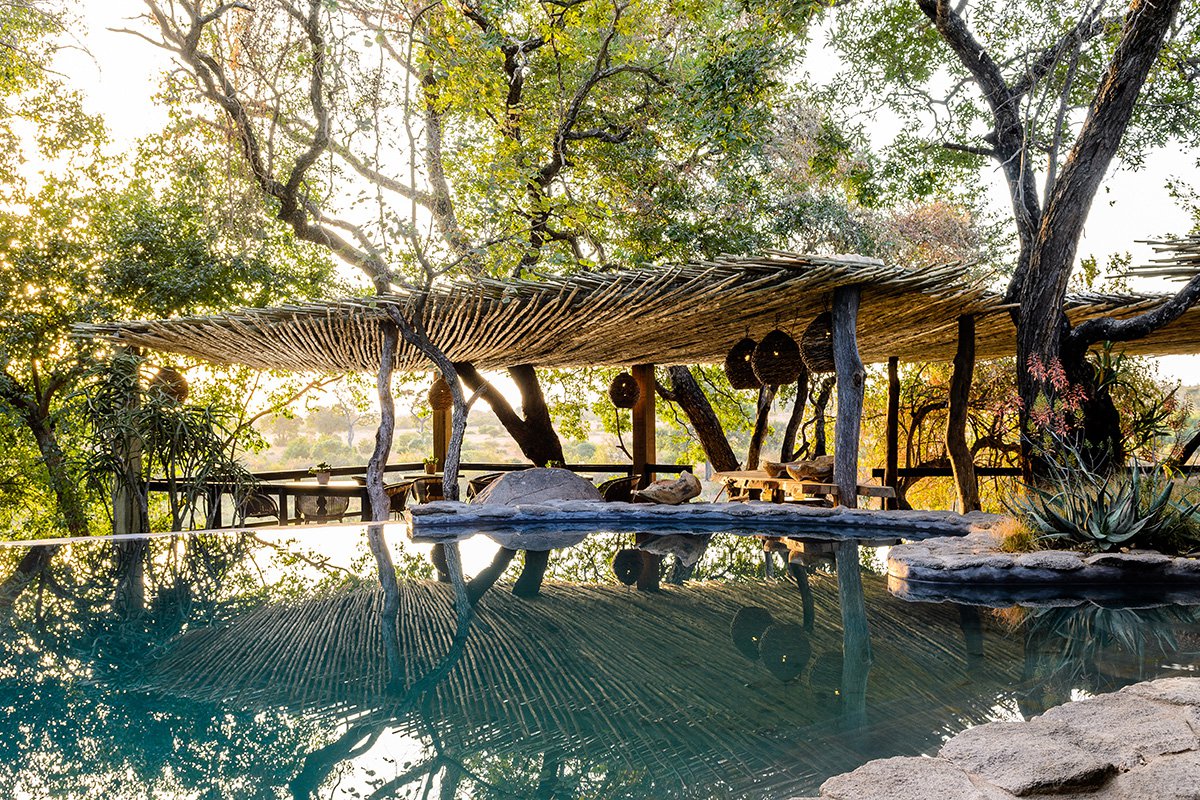 In retrospect, this all seems a little outlandish, but it was the ’90s and this teacher had been at my school since the ’70s, which I’ve been told was a much more lax time when it came to rules and regulations. Our classroom had a terrible stench that wafted all the way to the end of the hallway and must have driven the other teachers mad, yet was tolerated. Much of that year’s class time was spent talking about Africa, a place I knew very little about, and the animals that lived there. We were regaled with stories of the Big Five and spent hours poring through photo albums filled with pictures taken on different safaris. Once I was old enough to truly grasp the concept of marriage and started thinking about my own wedding, I knew – without hesitation – that my big post-wedding trip would include a safari. 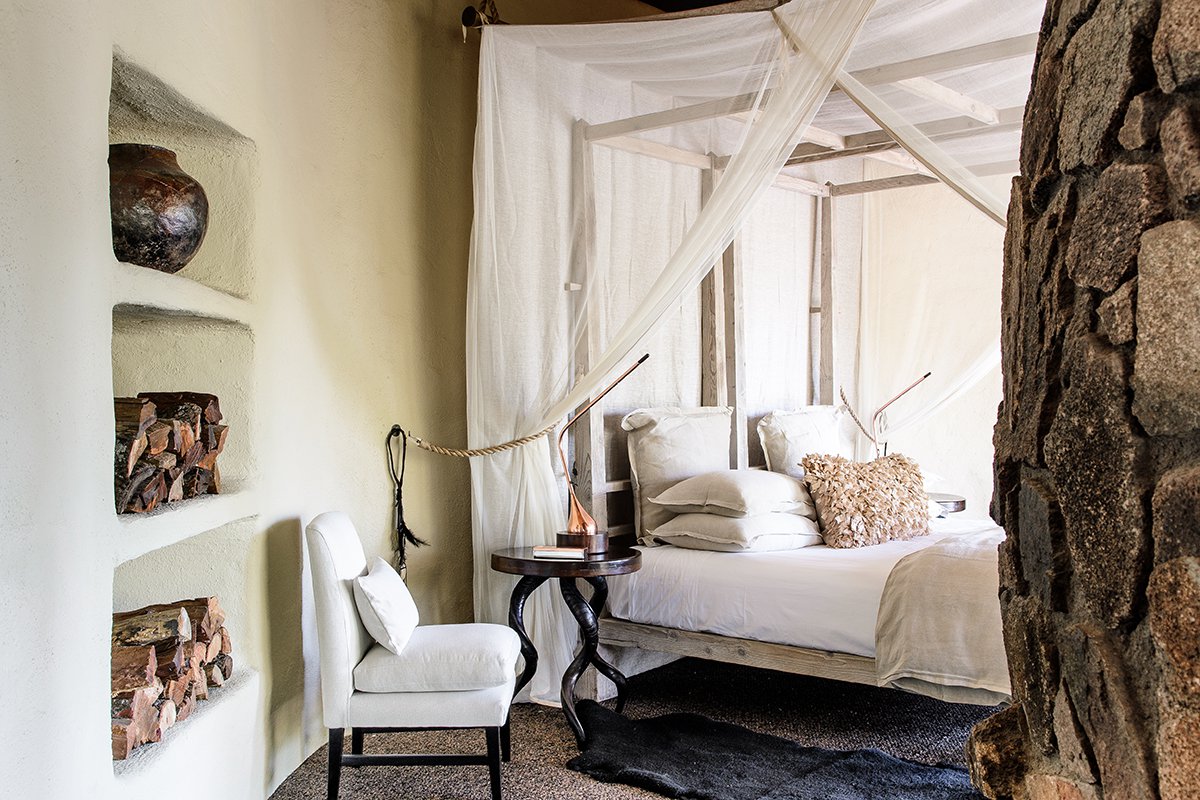 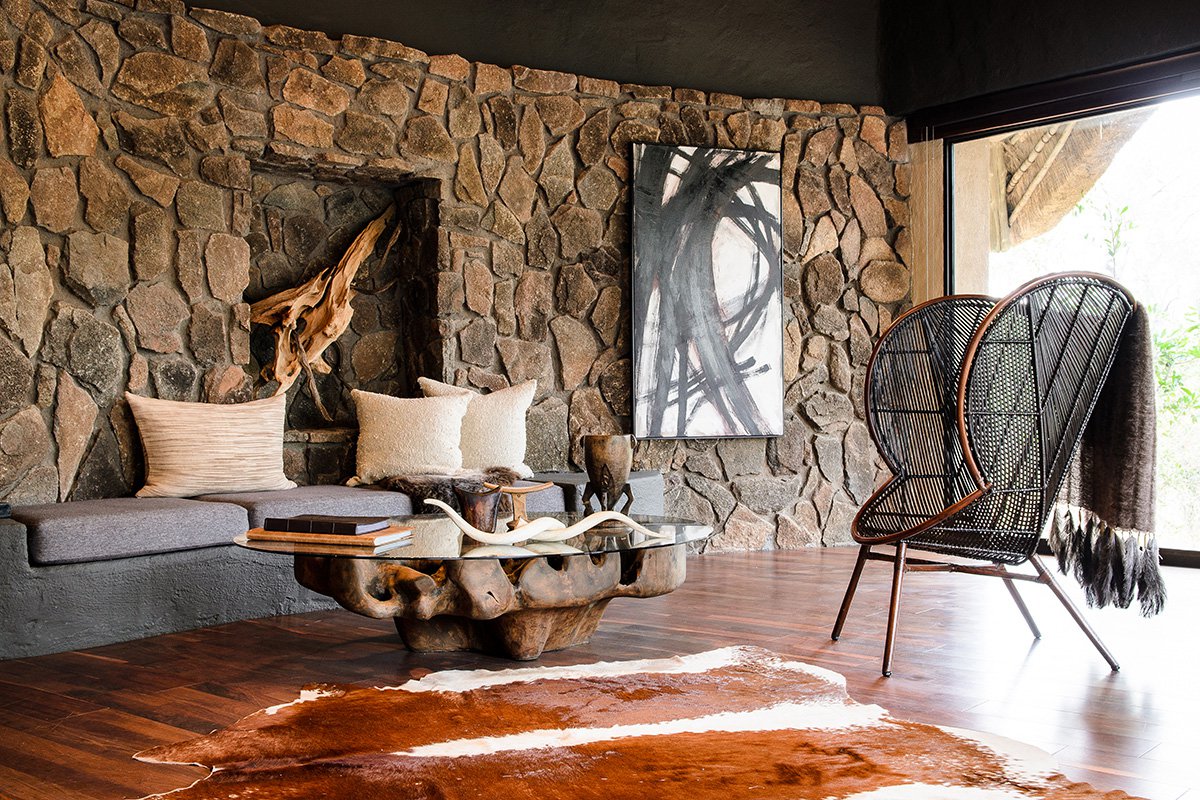 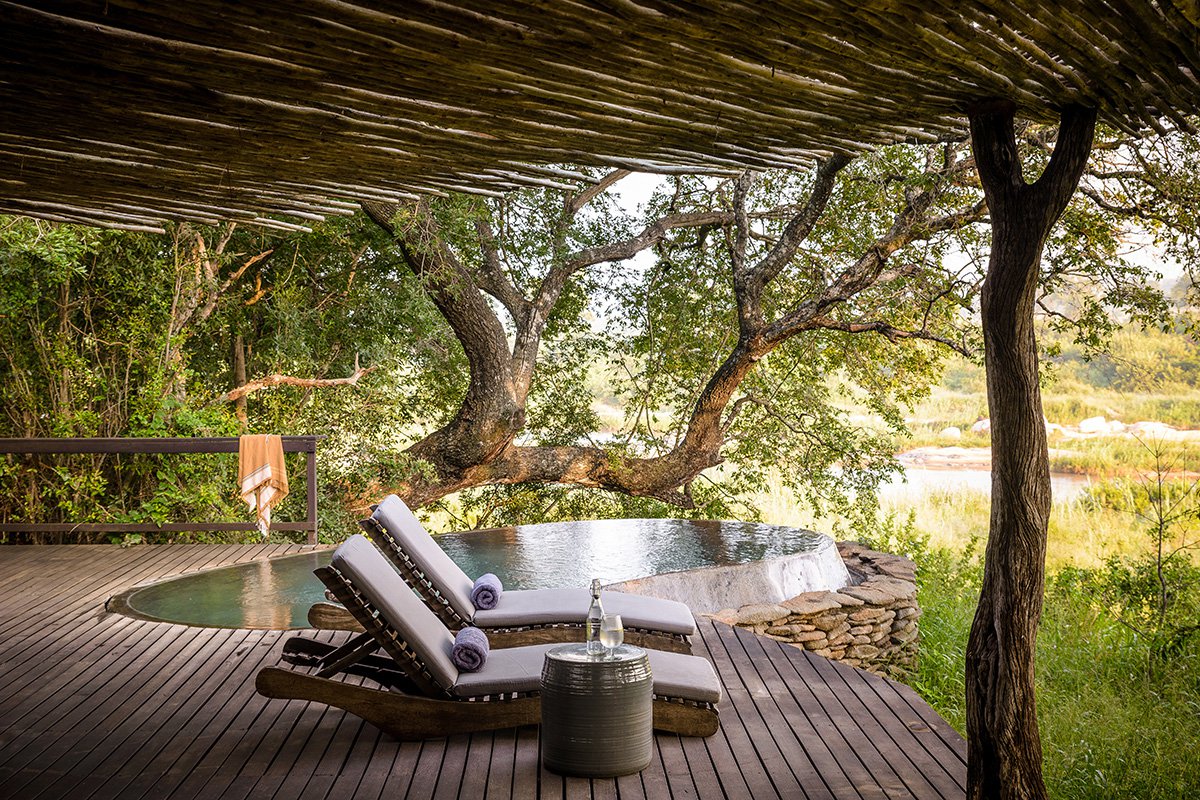 Fast forward a decade and a half. I had found the guy and finally (finally!) it was time for my African safari. Our base would be the supremely elegant Singita Boulders Lodge in South Africa’s Sabi Sand Private Game Reserve, chosen for its dedication to preserving African wilderness for generations to come and for its top-notch reputation as one of the continent’s best safari lodges.

Adjacent to Kruger National Park, the stylish twelve-suite lodge looks like it was carved out of the river bed, taking cues from nature with its charcoal and copper colors, stone walls, and thatched roofs. The lodge is surrounded by rust-colored terrain flush with all the animals you hope to see on safari — lions, leopards, zebras, giraffes, rhinoceros, and elephants — along with a few new-to-me species like the graceful impala and shockingly vicious wild dog.

A fan of slow travel, I decided to extend our stay one night past the recommended three, so we’d have plenty of time to partake in the twice-daily safari drives, relax at the spa, and swim in the plunge pool outside our villa. Maybe it was the jet lag, or the malaria pills, or the fact that I was on my honeymoon in a place that I had been thinking about for years, but the lodge and its surroundings were intoxicating and left me in a dream-like state for the duration of our stay. 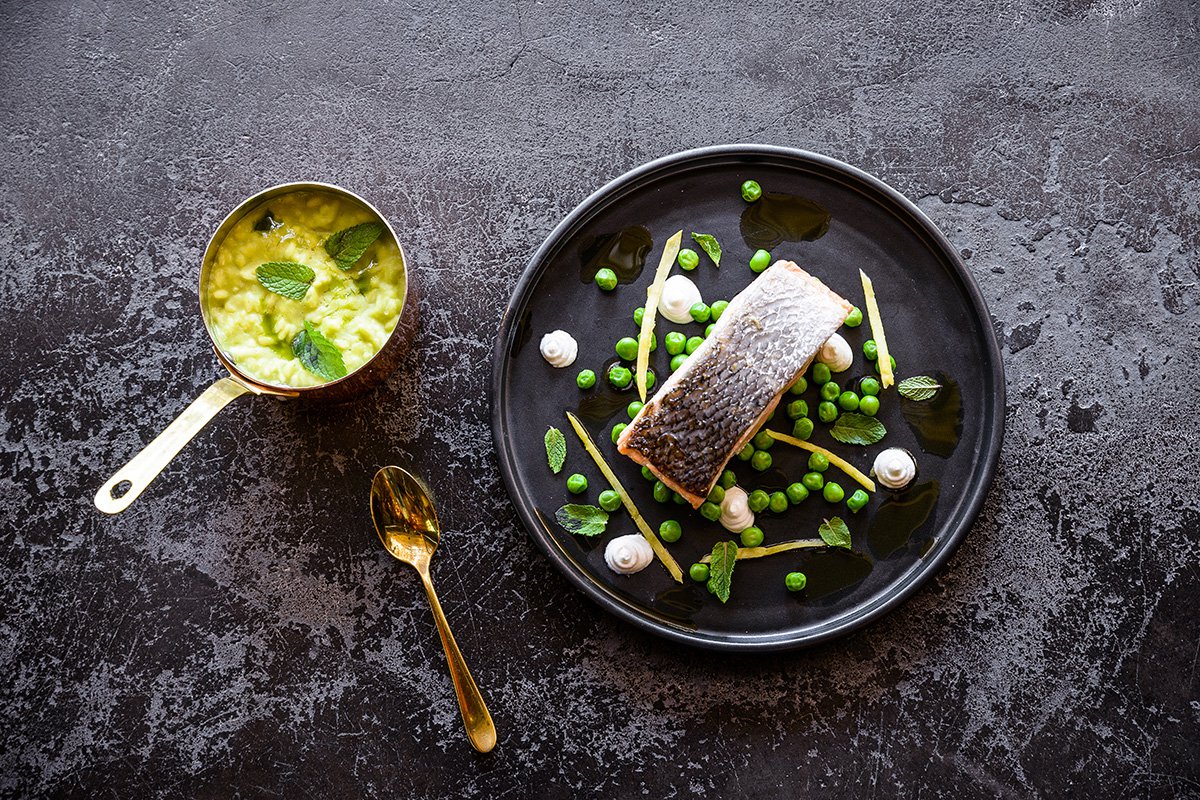 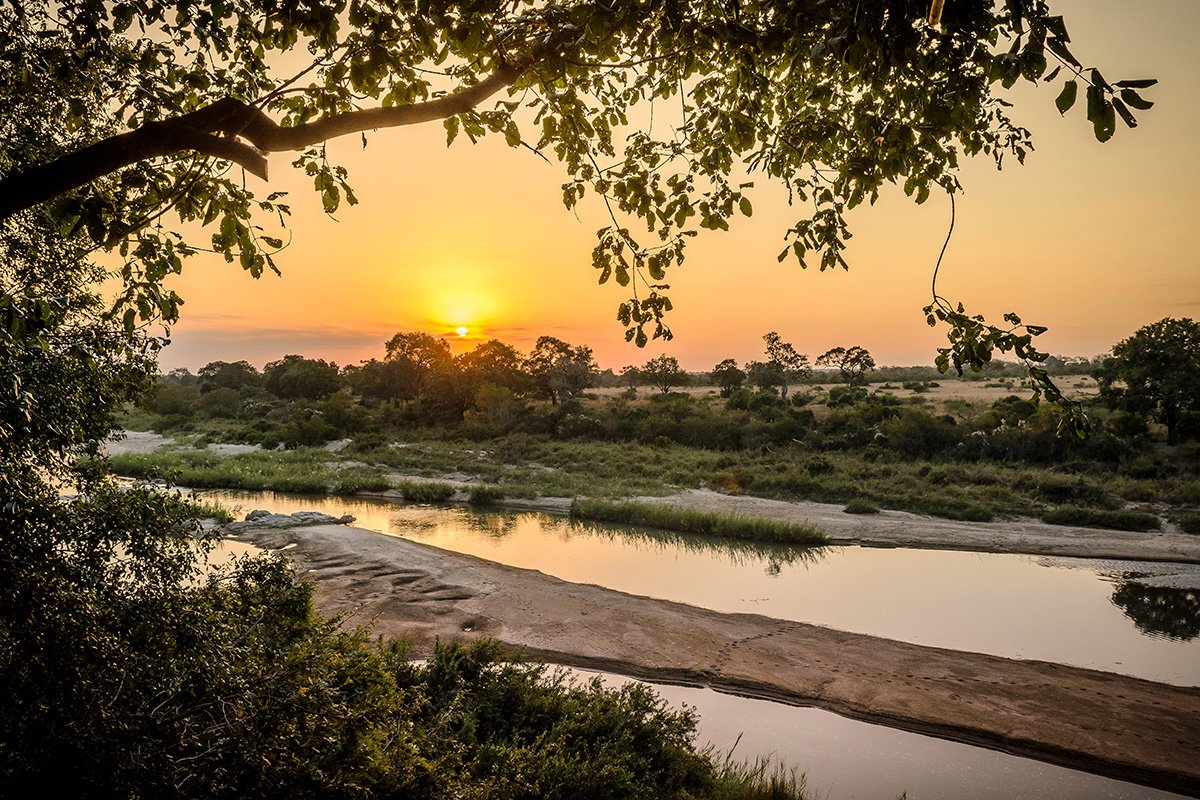 Sunset over the bush. Photo courtesy of Singita. 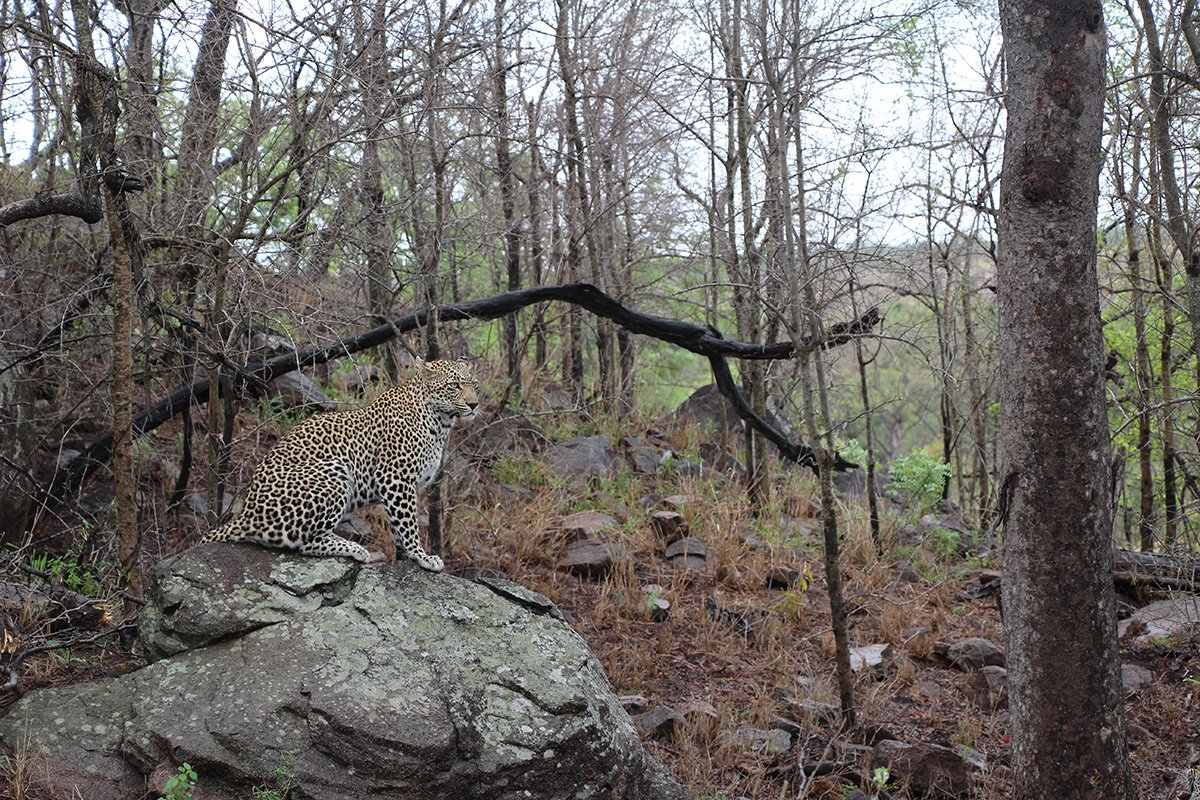 A leopard blending in. Photo by Berit Baugher

Each day started with a 4:30 a.m. wake-up call, followed by a soft knock on the door a half-hour later. A staff member would walk us to the main lodge, keeping a watchful eye for leopards. There we’d catch up with the other guests and discuss the animals we’d heard lurking around the villas the night before while sipping fresh-brewed cups of coffee. Paul, our guide, would gently rally our group and lead us to our jeep, asking which animal we most wanted to see that day. Every drive felt like an adrenaline-fueled adventure. You never quite knew where the day would take you, and rarely did we see another car on the road. Favorite sightings included a snoozing lioness and her cubs, a prowling pack of hungry wild dogs, and an angry hippopotamus.

Afternoons were spent at the lodge, resting and recuperating before the evening drive. At four o’clock, it was time to head back out, again not knowing where the evening would lead. Most nights ended with a sundowner in the bush, served alongside local snacks like dried mango and biltong (South Africa’s far superior version of beef jerky) and conversation about the day’s events. Dinners were back at the lodge, except one evening when we were driven to a mysterious location in the bush. Lit by what looked like a thousand candles, our meal was served alongside a fire and included a performance by local singers from a nearby village. It was the kind of night that we’ll talk about forever.

One of the questions that friends and family have asked the most is whether or not driving around for hours each day looking at animals ever got boring. Simply put: not one bit. Being out in nature, observing the circle of life in its most raw state, was both exhilarating and utterly relaxing. It was, without a doubt, one of the best things I have ever done. I’m already dreaming about my return. 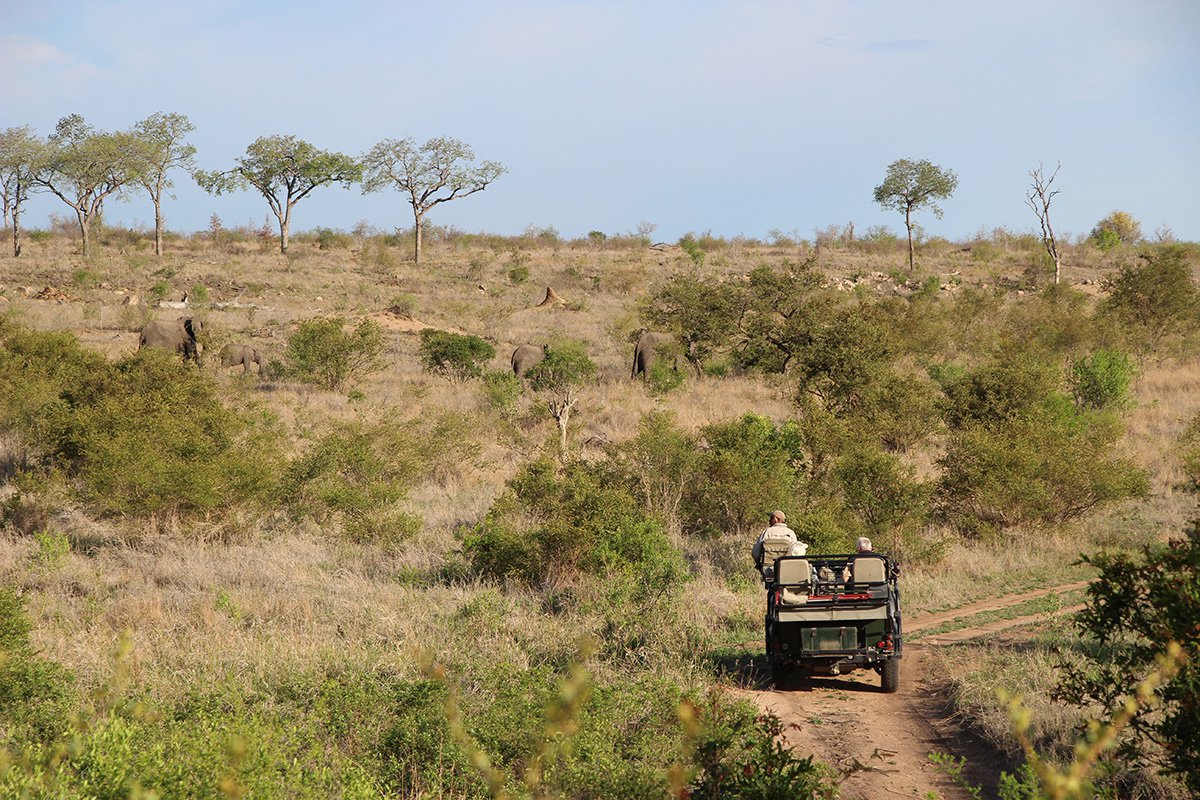 One of Singita’s safari jeeps out in the bush. Photo by Berit Baugher. 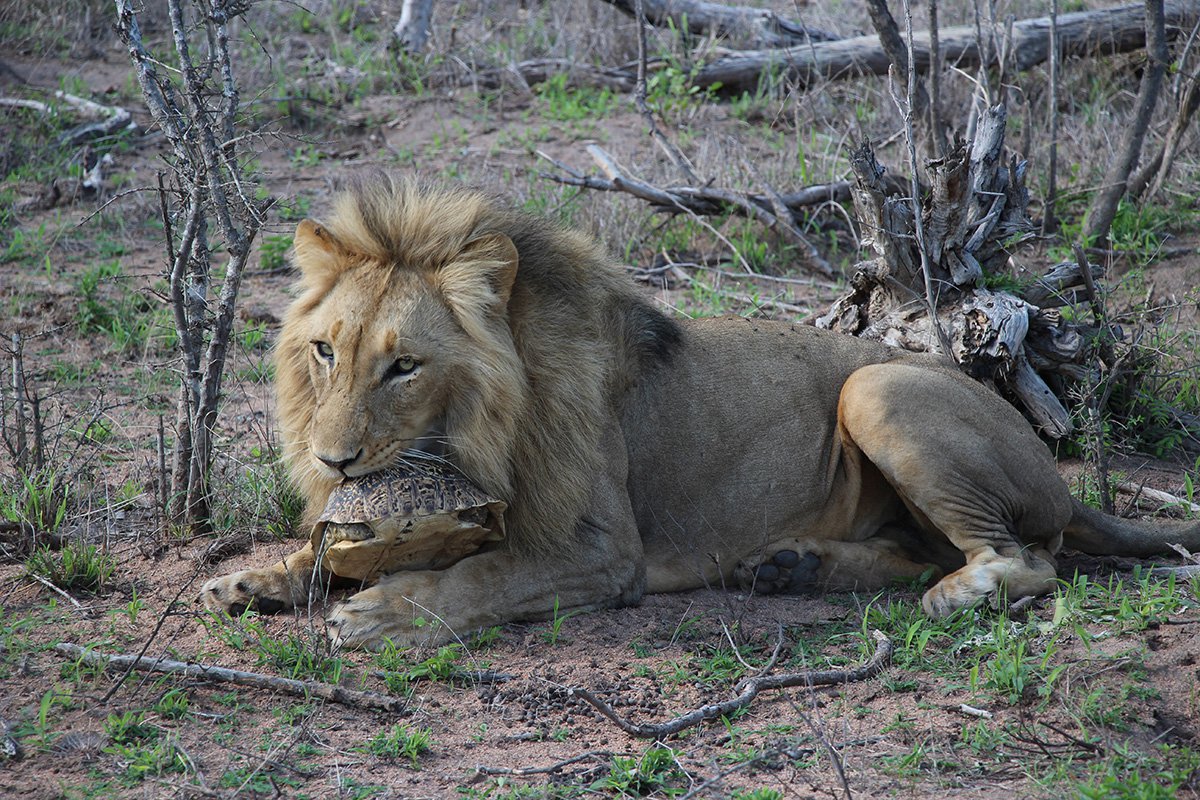 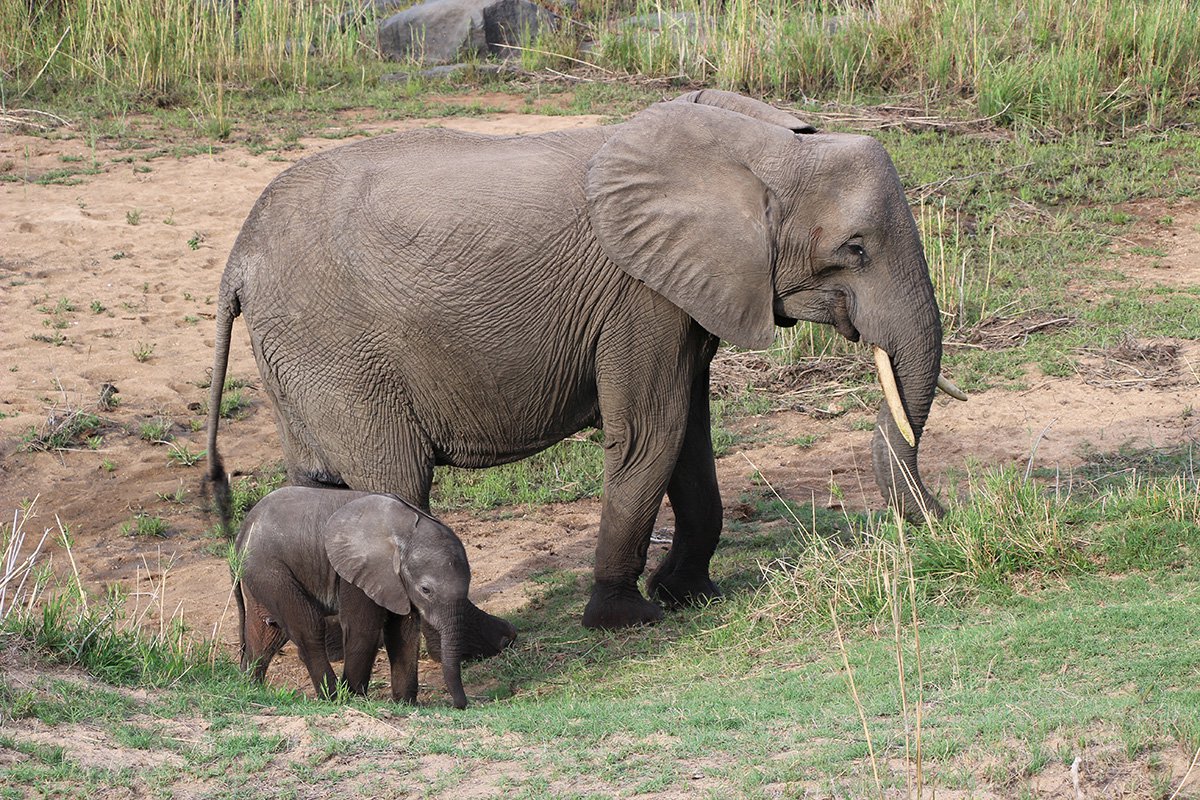 Rates change seasonally and start at $2,100 per person per night. Click here to inquire about reservations. Or get in touch with the Fathom Travel Concierge, and we can plan your trip for you.

How to Get There

The lodge can arrange scheduled flights and private charters from South Africa’s O. R. Tambo International Airport (one hour) and Nelspruit Airport (thirty minutes) through Federal Airlines. By road, the drive is around six and a half hours from Johannesburg or one hour from Hazyview.

Safari Essentials: What to Pack and What to Know Before You Go
Babylonstoren: The Technicolor Salad
This South African Conservationist is Leading the Charge in the Safari Space