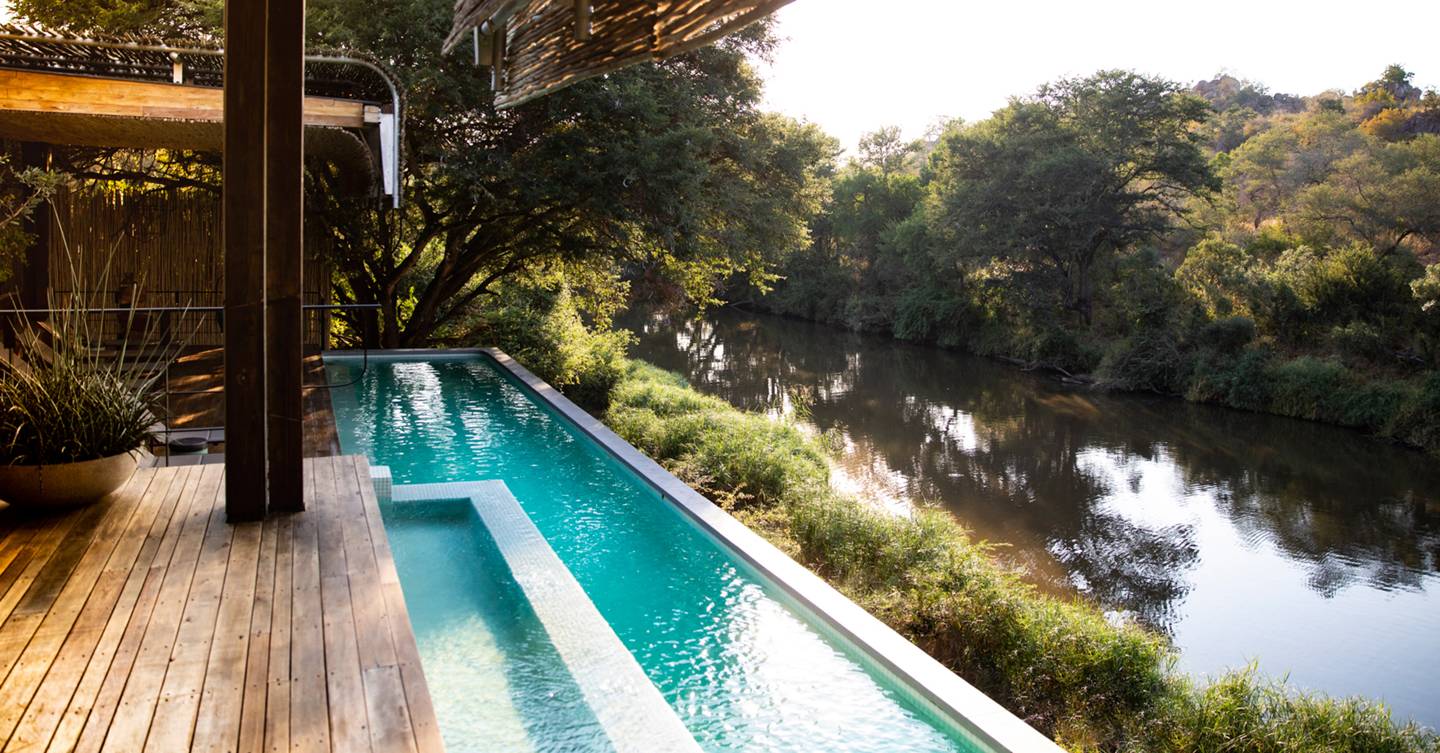 First impression Bloody hell. And: is that really what a hippo sounds like?
Staff Seemingly effortless, but passionate and utterly brilliant.
Food and drinks Way, way beyond typical safari-carnivorism.
Bed and bath Glassy, colourful, contemporary, nature-noisy.
The crowd Silicon Valley bigwigs; Mexicans with a third home in San Miguel de Allende.
In a nutshell The Lion King of safari lodges.

Set the scene
In the saffron-tinted dawn light across the Kruger savannah, the awed silence is broken only by camera clicks. A sleekly powerful lioness yawns extravagantly before picking up one of three tiny cubs in her mouth with a mother’s tenderness. An hour later, we’re drinking hot chocolate spiced with smooth Amarula liqueur as a 40-strong herd of elephants, including a few tiny calves, amble past on the other side of the watering hole – trunks lolling, leathery skin folds rippling, creating only a faint wood-crackle. By midday, we’re back at Singita Sweni, on the open wooden deck looking over the deadly mud-brown Sweni River, where hippos guffaw like Frank Bruno and crocodiles bathe with camouflaged menace. Tiggerish sommelier Daniel is foisting yet another blended South African white – as if it’s a personal favour to him to drink this particular 2015 Stellenzicht Semillon-Sauvignon. As its velvetine minerality slides over our taste buds, a vervet monkey in the surrounding foliage cranes its neck to stare at us like a demented peeping Tom. The serenity is broken only by the bittersweet realisation that this might be about as good as life gets. 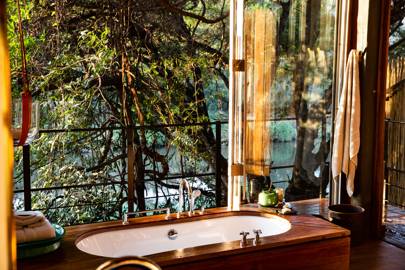 What’s the story?
Sweni is one of Singita’s 15 lodges and tented camps in five concessions in South Africa, Zimbabwe, Tanzania and most recently Rwanda. The grandfather of visionary founder Luke Bailesbought up a tract of the Sabi Sands game reserve, adjacent to the Kruger National Park, back in 1925 – and since he opened Singita Ebony Lodge at Sabi Sands in 1993, Bailes has bought or leased more than a million acres of the African wilds. He’s pioneered a form of safari in which conservation and next-level experiences for the 0.1 per cent make a virtuous loop (as well as protecting the land, guests often help support Singita’s anti-poaching units and non-profit partners). Along with sister property Lebombo up the hill, Sweni is on Singita’s second South African concession: a 33,000-acre swathe of the Kruger by the Mozambique border, overlooked by the totem-like rhyolite formations of the Lebombo mountains. Opened in 2004 and renovated in 2017, the seven-room Sweni is more intimate, colourful and explicitly African than the more airily muted Lebombo. Close to the river, in the midst of the foliage, it feels like staying in the jungle hideaway of a design-aware billionaire friend. This part of the Kruger is sometimes referred to as The Land of Lions, and these magnificent creatures can be seen on most of the twice-daily game drives. As well as the mother and her young cubs, we saw one couple mating, the otherwise imperious lion emitting strange gravelly snorts during 30 seconds of frantic thrusting. One evening, we saw three young lionesses unsuccessfully chase a giraffe in the gloaming. The knobthorn savannah is also a haven for giraffes, who are particularly curious round these parts, and there are lots of watering spots for the elephants, who aren’t averse to supping in the aquamarine infinity pools at Sweni and Lebombo either. As usual, though, it’s the small things that really hit home: the neon flash of the technicolour lilac-breasted roller, say, or a brown snake-eagle devouring its prey like a child with a sugary boot lace. As Singita only ever operates on private concessions, it’s relatively rare to see another racing-green jeep, and the guides are exceptional: in our case Charlie, a local tracker with an epic smile and an ancestrally-taught ability to spot a cheetah at 500 yards; and Mike, a young South African whose idea of a holiday is a four-month overland nature-schlep from Mozambique to Namibia, and whose raw passion for the bush borders on the poetic. From Mike’s favourite sundowner spot, up on a crest of the Lebombo mountains, the savannah stretches into fuzzy nothingness, with the huge setting sun spreading the soft pinks and lilacs of a retro Miami T-shirt.

What can we expect from our room?
Sweni’s seven bedrooms feel a bit like modernist Los Angeles Case Study houses, but surrounded by nature-buzz, with roughly slatted wooden ceilings and balconies looking through the foliage to the river. Cape Town interior designers Cécile and Boyd were inspired by the colours of nature – bird feathers, beetle shells, butterfly wings – so there are pops of colour around the place: tactile gemstone beads and whirly blue agate slices by the bed; colourful, thickly textured fabric wall hangings. Mustard mid-century chairs somehow make the rooms feel fresh, and miles from the wood-kitsch of many safari lodges. Everything has been thought of: canvas day bags, bush hats, woolen throws for chilly mornings, yoga mats and a minibar filled with South African craft drinks. Even the playing cards and Uno deck come in a beautiful worn-leather pouch. We stayed in the Pool Suite, watching water bucks and impalas approach from our private infinity pool and cocoon seat. 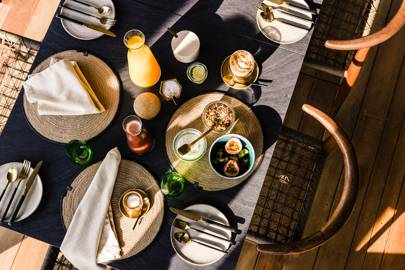 How about the food and drink?
Yes, there are safari staples such as gamey kudu and ostrich steaks cooked over a wood fire at the cosy braii night down by the river bend, when local staff members dance and sing Shangaan folk songs. But the food goes way beyond classic safari-carnivorism. Liam Tomlin, one of the top chefs in Cape Town, is the brains behind the concept of daily-changing small plates, produced in Sweni’s open kitchen by a local head chef trained at the community culinary school up at Lebombo. That might mean African favourites such as rich risotto-like umngqusho, aka samp (crushed corn) and beans; or Eastern Cape dorado with lime, fennel and salmon roe. The simple things impress most: the different breads baked each day, the quality of the feta cheese, the perfectly poached egg in the Sweni scotch egg at breakfast. Drinks are taken as seriously as the food. Singita’s cellars are home to one of the world’s biggest collections of South African wine, and Daniel does a serious cocktail – a wonderful rooibos gin and tonic with goji berries, cinnamon, cardamom, thyme, star anise and orange is a particular winner.

Anything to say about the service?
It’s next-level good, mainly because – for all the obsessive attention to detail – the staff look like they’re having a ball themselves. Because of the sheer remoteness of the lodges, staff live together in a purpose-built village, and the result is that they give the impression of being more than colleagues. There also seems to be a certain type here: from Grant, the ultramarathon-running manager of both Lebombo and Sweni, through Daniel, Mike, Charlie and the rest, the staff are all naturally effervescent and passionate in a way that can’t be faked. 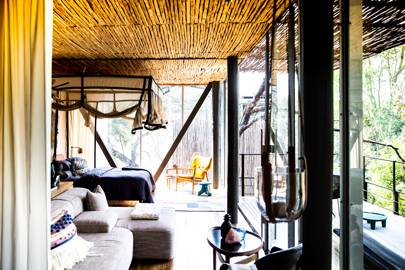 Anything we missed?
At Sweni and Lebombo, the conservation partnerships include the Lionscape Coalition, a response to the fact that African lion numbers have halved in the past 25 years. Both lodges are also designed with an impressively small environmental footprint: everything is on stilts and solar-powered, with wires running under wooden walkways, essentially meaning that you could pick both lodges up and leave the land relatively unscathed. For all of this, none of the staff are preachy or didactic, and there’s absolutely zero sense of the hedonism being dialled down. Oh, and the tiny Federal Air planes from Johannesburg to a muddy strip surrounded by game is a trip in itself. 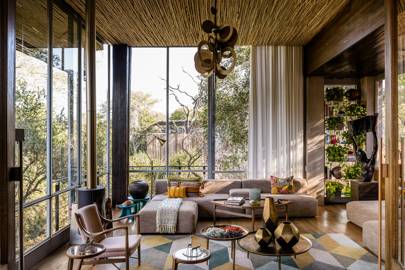 A final note: is it worth it?
There’s no escaping the fact that Singita is expensive. But there are private islands that charge more and offer less. You’re paying for food, wine and service done with almost cultish devotion and down to the tiniest detail, but in a way that seems effortlessly fun, and with impact-guilt minimised. You’re paying for the best, with a guaranteed degree of awe thrown in. So, yes, it’s worth it.

Sign up for the Condé Nast Traveller newsletter to receive our editors’ picks of the latest and greatest in travel – from our insider city guides to the most exciting new hotels in the world, as well as amazing holiday competitions.

Where to stay on the Western Cape, South Africa

Where to stay on the Western Cape, South Africa

Singita Kwitonda: the lodge on the frontline of Rwanda’s gorilla conservation