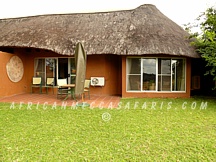 Mala Mala is the safari industry’s blueprint to the luxury photographic safari. Every aspect of the camp is designed to appreciate and enjoy the view of the surrounding wilds. Pathways wind their way along the perimeter of the camp to reveal individual ochre colored units tucked into the greenery which flanks the Sand River. Massive trees and rolling green lawns are filled with birdsong, with the occasional antelope or elephant

Rattrays on Mala Mala bears the style of crystal and leather, with beautiful furnishings that are a treat to the connoisseur of the finer things in life, captured over generations on a land that remains as old as time. Each suite or khaya (Zulu for “home”) functions as an inclusive home, resplendent with hand-selected furnishings, lavish his-and-hers bathrooms, a secluded outdoor shower and a private heated plunge pool.

Sable Camp Mala Mala is imbued with the spirit of Mala Mala and shares her soul. The Sable Camp is a more intimate version of the Main Camp and the choice for those seeking a more private and intimate safari. Each of the individually decorated, spacious and comfortable suites under traditional thatching occupies an idyllic vantage point and provides a platform from which to admire the unimpeded views