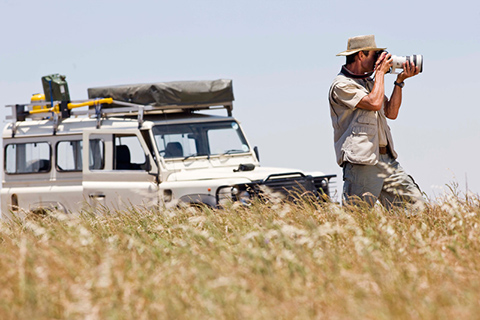 Because of its name, South Africa can be easily identified by its geographical location at the tip of Africa. Travelers marvel at the country’s history, embracing its beauty and cultural diversity. Motivated by a spirit of hospitality and friendliness, South Africans passionately support their culture and heritage.

Indeed, South Africa offers travelers a unique opportunity for travel – one that includes the country’s famous beaches, with their world-class surfers, and some of the world’s most-loved historical sites and parks. Eco-tours and safaris allow intrepid explorers to visit game reserves and witness African wildlife, such as elephants, lions, and giraffes, up-close. Endangered species can also be spotted on tours. In addition, the country’s wine country and fine-dining establishments make it possible for visitors, who love the culinary arts, to sample some of the best wines and foods internationally.

Everything about Africa that inspires and draws us to the continent can be found in South Africa. For example, Kruger National Park provides a natural habitat for African wildlife, such as the leopard, lion, elephant, giraffe, and zebra. Besides its safaris and African reserves, South Africa features a thriving arts scene in its cities as well as urban conveniences, such as five-star dining.

Probably one of the best ways to plan a safari in South Africa is to take one at night. At this time, you can see various species of wildlife and predators lurking in the dark as well as regard the stars and moon’s waning or increasing light. The Big 5, considered historically as the most dangerous game by hunters, seem to take a new and even more dangerous form when viewed at night. Big 5 animals include the lion, rhino, leopard, Cape buffalo, and elephant.

Your journey takes place in the Limpopo and Mpumalanga provinces, where you can experience the Great Outdoors in its purest form. If you only have time for one activity in South Africa, you should add a night safari to your travel itinerary.

Hopefully, you will have more time to savor the culture and traditions of South Africa, including the local cuisine. One of the ways you can do this is by sharing braai in Cape Town with the locals. In Afrikaans, braai refers to cooking meat over an open fire fueled by wood. Some of the meat includes chicken, lamb chops, steak, or sausage, called boerewors.

Only in South Africa does the idea of a braai gain its momentum, as it encourages a sense of home and well-being. The concept centers on spending time with family and friends, sitting back in the afternoon while visitors bring pap (corn porridge) or potato salad to your gathering. The meat cooks throughout the afternoon until dinner time.

A braai can also be experienced in South African restaurants, including some well-known braai eateries in and around Cape Town. In addition, the South African tradition has its own holiday. September 24 marks National Braai Day.

Hike Among the Wildflowers in the Spring >

If you love outdoor adventure, camping and hiking, you can add to the wonder of the trek by visiting Namaqualand, a region located near Namibia, close in the Northern Cape. The enchanting venue bursts into a floral display of wildflowers during the spring, which occurs from July to October in South Africa.

The wildflowers carpet fields and decorate roadsides throughout the area. The vast variety of floral species creates a dazzling display, as about 3,500 flowering plants show off their blooms, including the African daisy.

Gaze Up at the Night Sky

To fully participate in the floral show, follow the Wildflower Route in Namaqualand, which is a 5-hour drive north of Cape Town. The Goegap Nature Reserve provides overnight accommodations and picnic areas for flower lovers who visit during the spring. At night, you can find plenty of reason to stargaze too, as the nearby town of Sutherland boasts some of the clearest and most beautiful night skies anywhere in the world.

While hiking or traveling by cable car up Table Mountain in Cape Town can become rather congested, it is something that you don’t want to miss. The famed 3,560-foot Table Mountain provides an excellent view of Robben Island, Table Bay, and all of Cape Town’s metro area.

By making the ascent, you will be rewarded with a panoramic viewing experience. Whether you choose a 5-minute cable car ride or embark on a strenuous and rather lengthy hike, you will find true bliss once your reach the top. Table Mountain is located in Table Mountain National Park, where protecting the fynbos has been made a priority. Fynbos is an Afrikaans word that means the local floral kingdom.

Therefore, the park is home to one of the most diversified floral communities in the world. Over 2,000 species of floral plants can be found in Table Mountain National Park. On Saturdays, some locals follow the old tradition of hiking up Table Mountain, then travelling to the local market to buy foods and provisions for a Saturday lunch.

If you want include a less-crowded hike on your travel itinerary, you might consider hiking up nearby Lion’s Head. The attraction is known as a place where hikers often enjoy moonlit picnics.

View the Whales and Savor a Glass of Wine

If you want to whale watch, the best time to enjoy the activity is from June to November – especially in the seaside town of Hermanus, which sits east of Cape Town. In fact, whale watching in Hermanus has become a regular activity. Whales travel to the location to rest, mate and deliver their young. Hermanus even has its own town whale crier who announces approaching whales. The watcher blows a kelp horn to alert locals when the marine animals show up off-shore.

While you are spotting whale watching in Hermanus, you can also sip on a glass of wine. The Hermanus Wine Route, while lesser known than other South African wine routes, offers a glorious way to find and sample wine. The route winds through the Hemel-en-Aarde Valley. Hemel-en-Aarde means “Heaven on Earth” in Afrikaans.

What would you like to do – go on Safari, get to know the locals, hike, whale watch, or enjoy a glass of wine? Begin planning your South African journey now.

Things to Do and See

South Africa has the fifth largest population and is the 9th largest in area at 1,219,000 km2.  The country shares its border with Botswana, Lesotho, Mozambique, Namibia, Swaziland, and Zimbabwe.  South Africa has a remarkably smooth 2,500 km (1600 miles) of coastline shared with the South Atlantic and Indian Oceans.  Distance from the south to the northeast corner of the country is about 1800 km (1200 mi) and between 1,000 km and 1,300 km (620 mi to 810 mi) from northern to the southern border at its widest point.

In South Africa, the President is the head of the government and the head of state whose tenure depends on the decision of Parliament. However, the constitution is the supreme law of the land and all three branches of government, the executive, legislative and judicial.  South Africa is divided into 9 regions, with the Limpopo province being the largest.  The county is further comprised of  8 metropolitan municipalities, 44 district municipalities, and 205 local municipalities. 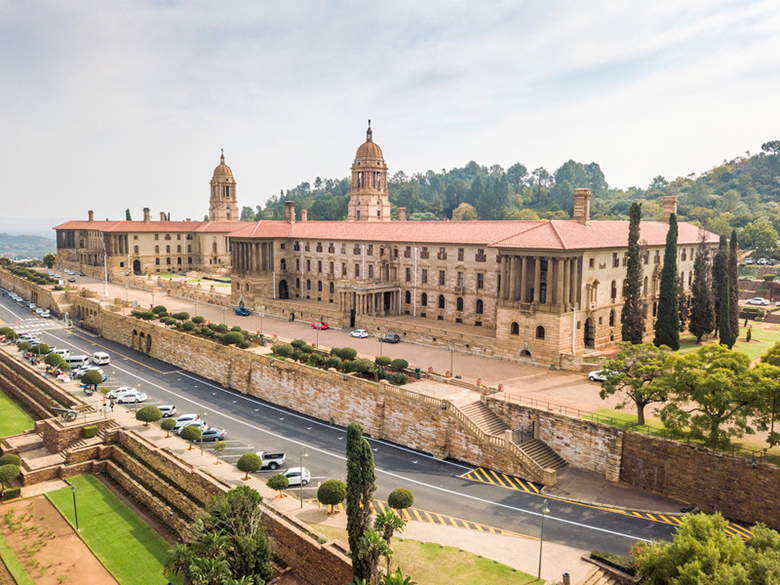 Below is our country profile containing facts and information to familiarize you with South Africa. 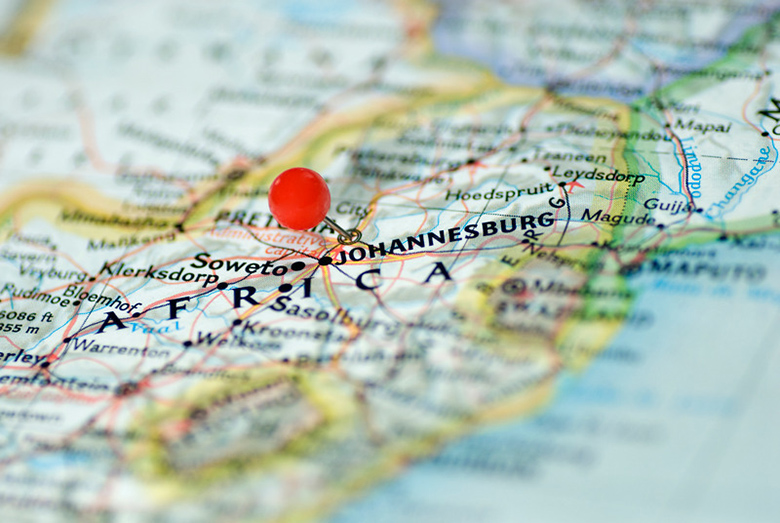 What currency is used in South Africa?

South Africa’s official currency is the Rand which is common represented by the symbols (ZAR; R, or “rand”) and comprised of banknotes and coins. The most famous coin from South Africa is the Krugerrand- a highly desirable gold coin that comes in 4 denominations with the one-ounce piece sought by collectors world-wide.

Where should I visit when in South Africa?

While in South Africa consider visiting the Western Cape with its magnificent beaches or explore such memorable destinations as Umhlanga Rocks, or one of the many game reserves such as the one at Hluhluwe Imfolozi reserves, or one of South Africa’s heritage sites such as Mapungubwe.

When is the best time of year to travel to South Africa?

The climate of South Africa varies more than most sub-Saharan countries in Africa due to its higher elevations. It has a high amount of sunshine. Rainfall is about half the global average. Temperatures are influenced by its significantly sized coastal regions where cold and warm currents create different climatic conditions. Freezing temperatures at high altitudes are quite common in winter. Here are some examples of temperature differences: Johannesburg 26°C (78 °F) to 4 °C (39.2 °F); Bloemfontein 31°C (87 °F) to -2 °C (28.4 °F), Richard’s Bay 29°C (84.2 °F) to 12 °C (53.6 °F).
Depending on your activities, for most travelers the tourist season generally falls in four categories. Hiking and outdoor enthusiasts find April-June as the best season while beach goers and enjoy the months of December through February. Be sure to bring the appropriate clothing and plan accordingly.

What are some of the activities and things to do in South Africa?

Excursions abound with tour operators offering many single and multi-day packages that include scenic flights over Plettenberg Bay to the Knysna Heads; adventure tours less than one hour outside of Johannesburg at Lion Rhino Park; historical tours of the Battlefields at KwaZuluNatal. Adventure enthusiasts can enjoy many outdoor activities such as open water and shore fishing. For the thrill seekers there are tour operators offering famous cage and scuba diving adventures where you can see great whites in their natural habitat. Surfing at many coastal cities attracts world famous events and instruction at academies located in the Western Cape at Jeffrey’s Bay and Muizenberg.

What are some of the “must see” South African destinations?

Visitors can choose a wide range of activities and destinations. South Africa offers world-class beaches, golf courses, safaris, ecotours, and camping facilities for all interests and age groups. Outdoor enthusiasts can secure off the beaten path tours and explore a diverse landscape offering unique travel experiences. The interior section of South Africa is filled with many beautiful landscapes and historical treasures. Some of our favorite sites are the Nelson Mandela Museum, the Mala Mala Game Reserve, Cradle of Humankind,and Robben Island.

How expensive is South Africa?

South Africa offers many excellent choices of accommodations throughout the country. Depending on the region or city that you will be visiting, travelers have many options ranging from youth hostels and rooms, to mid-priced and luxury hotels. Budget and last-minute travelers have plenty of choices at all ends of the pricing spectrum with lower season prices ranging between USD$20 and USD$40 a night for modest, yet tidy rooms.

For luxury travelers, hotels in the larger cities such as Cape Town, Durban and Johannesburg can cost upwards of USD225 to $$450 a night- depending on the season. For visitors interested in Safari’s, travel and tour packages (group or private rooms) offer a variety of options depending on whether you are camping or seeking mid-range or luxury options. In South Africa, you should be prepared to spend between $175 and $1400 a day exclusive of airfare and travel day expenditures.

Every travel budget should also take into consideration the cost of meals, ground transportation, park and entrance fees for exhibits and museum as well as entertainment which can cost $100 a day per person. Pricing for flight sand car hire is very competitive, and generally in the traveler’s favor but will vary based on seasonal demand and dates of travel.

Do I need a visa to visit South Africa?

Depending on your citizenship and country of origin, a visa and other travel documentation may be required to visit or study in Scotland. At present, no visa is currently required if you are British (or a part of the United Kingdom (UK) or if you are from within the EU. However, with the heightened possibility of the UK leaving the EU (Brexit) travelers from other countries should need to check with UK immigration.