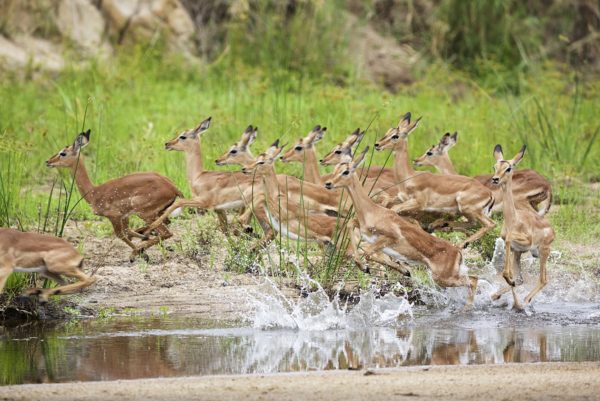 “I was all of five, but I shall never forget that five-day car journey in 1937, when I accompanied my parents from Zululand via Swaziland to the Lowveld, which adjoins Skukuza in the Kruger National Park. The petrol tank of my father’s Cadillac kept scraping against the ridged, dirt roads, which caused it to leak and to require constant plugging with ‘blue mottle’ soap! All very exasperating for him – more so when his two Doberman Pinschers killed all the laying hens in the supplies lorry, loaded with our provisions for the next two months. I’m not musical, but to pass the time I blew tunelessly into my ‘mouth organ’, severely adding to my father’s irritation. He eventually grabbed the instrument and threw it into the veld of Swaziland, prompting me to howl for hours.

“Those were the days when hunters shot many animals without a conscience. Fortunately these same species now roam the MalaMala Game Reserve unhindered, and the flora and fauna are well protected for posterity, too. Today MalaMala boasts one of the greatest wildlife diversifications in Africa and thrilling game viewing that consistently draws nature lovers from across the globe – as well as some of the world’s most respected wildlife photographers and film-makers.” – Michael Rattray

The Sabi Game Reserve was proclaimed in 1902. In area, it was roughly twice the size of the present Kruger National Park. Some of the area was used as grazing by farmers, and game laws were nebulous – farmers were allowed to shoot game in defence of their livestock (an arrangement far from ideal from a conservation point of view). In 1922 the farm MalaMala was acquired by the Transvaal Consolidated Land and Exploration Company (TCL); later, 800 cattle were shipped to Toulon by rail. In the next six years, managers from TCL were to shoot over 500 lions in defence of their cattle. This was before the untenable shortfalls of farming cattle in the arid and disease- and lion-infested Transvaal Lowveld were finally acknowledged.

The National Parks Act was passed in 1926. The Sabi Game Reserve was effectively reduced by about half, resulting in the Kruger National Park in its current form (devoid of human occupancy, and governed purely by conservation principles). The land to the west was now open to private ownership. The land had proven useless for farming; however, its value as a wildlife haven was being recognised, and individuals bought properties to be used privately for game viewing, relaxation and hunting. In 1927 William Campbell (affectionately known as Wac) bought Eyrefield for £2 150, and in 1929 MalaMala for £3 656 pounds. Loring Rattray, Michael’s father, bought the adjacent Exeter in 1937, and Wallingford in 1939.

The site of Wac’s first MalaMala camp was in the area where the Mlowathi River flows into the Sand River. It was soon found that the rains made the river difficult to ford, and in 1930 the camp was moved to its present site, on the western banks of the river. It was used exclusively in winter as a base from which to hunt. But even then, guests were treated like royalty. And royalty (such as Princess Alice and her husband, the Earl of Athlone) were often guests.

Lady Campbell visited MalaMala for the first time in 1935. She embarked immediately on the task of transforming the camp, planting the bougainvillea that has become known as MalaMala’s signature bloom. Today still sees the shock of pink growing abundantly along the camp’s immaculately swept pathways.

In 1960 Wac submitted his last game report. For more than 30 years he had carefully observed and recorded what had transpired in the field. In that last report, he noted that warthog were now fortunately on the increase, while sable antelope were on the decline. He mentioned at the end of his report that 130 guests had enjoyed MalaMala that season, more than half of these having been women and children (a new development). Wac signed the report as “Colonel” and was never to return to MalaMala.

Two years later, on 17 September 1962, Wac died and MalaMala passed to his son, Urban. The camera replaced the gun and Africa’s first photographic safari destination was born. Urban sold MalaMala in 1964 to a company named MalaMala Ranch (Pty) Ltd – the shares of which belonged to Michael Rattray. In 1970 MalaMala was described by TV Bulpin’s Discovering Southern Africa as “luxurious accommodation for up to 22 people. Tariff R30.00 per day” (which seemed a very high tariff when you consider that five-star hotels were charging R12 bed and breakfast).

In November 2013, in a ground-breaking land restitution transaction, the South African Government acquired MalaMala’s ‘land and buildings’ from Michael Rattray and transferred the ownership thereof to the claimant community, represented by the Nwandlamhari Communal Property Association (CPA).

In March 2016, following an appropriate transitional period, Mr Michael Rattray, Mr Stephen Saad and the Nwandlamhari Communal Property Association entered into a long-term co-management agreement for the management and operation of the MalaMala Game Reserve business.

The co-management agreement was structured to derive real, tangible benefits for the Community and was founded on the core principles of:

After more than 50 years at the helm of one of South Africa’s most successful and internationally acclaimed eco-tourism businesses, Michael and Norma Rattray retired from MalaMala in July 2016 and entrusted the future and safe-keeping of the business with Mr Stephen Saad, in partnership with the Nwandlamhari Community