“Would you mind passing the salt?” It’s not every day you’re trading tableware with Sir Richard Branson over a small family lunch at his own safari lodge, but by now I was almost getting used to it. I’d spent the last few days trailing the effervescent, scruffy-haired mogul, along with his wife Joan, son Sam and various orbiting members of his team, around Johannesburg for the centenary celebration of Nelson Mandela’s birthday, where Barack Obama had delivered a rousing speech on the future of world politics.

After a busy week, I was here at Ulusaba in the Sabi Sands reserve that borders the Kruger National Park, to inspect its newly renovated Safari Suite. I had brought my father along for company, Branson had decided to drop in on a whim, and now we were all gathered for lunch on a veranda breaking freshly-baked bread, feasting on a never-ending succession of pan-African dishes, and tearing through wine from Ulusaba’s extensive cellar. 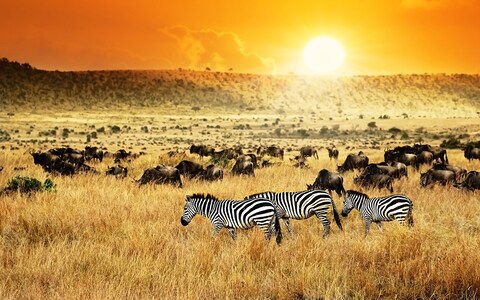 “In the early days, yes, he was, by definition, a terrorist,” Branson concedes of his late friend, who had been a frequent guest here, and off they go about the intricacies of war, as I glare from my seat opposite until the conversation finds its way back to Ulusaba.

Dubbed fondly as his “Necker in the bush”, Branson acquired the land in 1994. “The first time Joan and I visited, it was a shack on a rock,” he says. “We were greeted by two leopards mating – they go at it for three days, quite the challenge – and we stayed in a tiny little makeshift treehouse, wobbling high above the plain. I knew I’d discovered another little slice of paradise.” 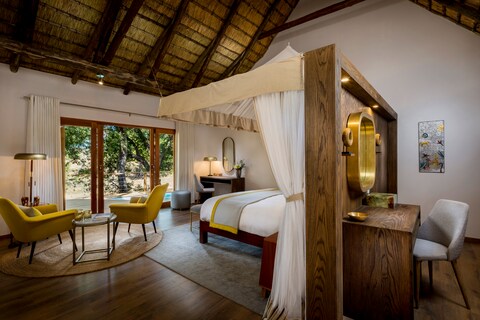 It’s hardly little, of course. More than two decades later and after several renovations, Ulusuba today covers 33,000 acres of bush and hosts two camps with 20 rooms among them, interconnected by way of meandering rope bridges.

The first is Rock Lodge, perched high atop a craggy outcrop, which Branson has a slight preference for. “You can see the enemy coming”, he says, and a flash of mischief crosses his face, not unlike that of the verdant monkey hovering in a tree above him, eyeing up his croissant. The second, his wife’s favourite, is Safari Lodge, huddled underneath on the banks of the dry Mabrak riverbed, the new star of the show being its 2,010 sq ft Safari Suite, recently converted from three separate lodgings. 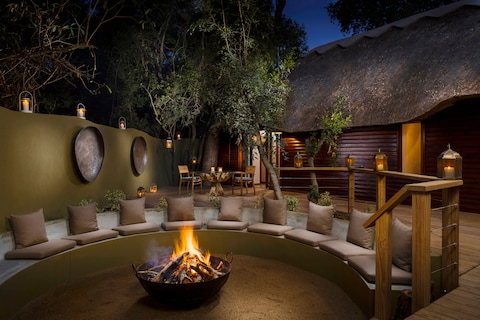 I’m one of the very first to stay here, much to the mock-horror of Sam, who’d put in the request but been beaten to it, and Branson himself, who has stayed at Ulusaba four times already this year, but has still not sampled its latest upgrade. “It’s always booked when we try to get it,” he grumbles.

The suite, still harbouring that satisfying scent of fresh paint, accommodates two guests in a standalone residence with views across the fragrant bush that unfolds for miles behind it. A walled, lantern-strewn, tree-dotted garden with a boma fire pit leads to the front door, and a spacious pinewood deck wraps around the back of the property. Inside, South African designer Franci du Toit has blended modern, minimalist interiors finished in cream, gold and ochre; with a rustic African charm in the shape of well-placed artefacts, dark wood furniture and a thatched dome roof. 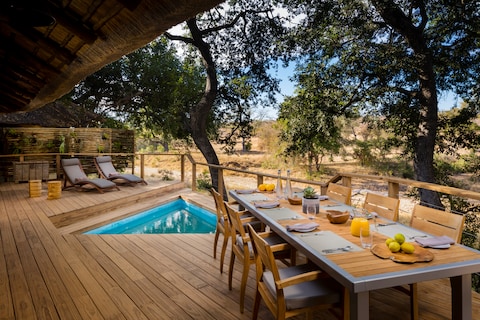 If you’re a party of four, the Safari Suite can be interconnected with the matching Safari Room that neighbours it, also newly renovated and with its own en-suite bathroom – this set-up affording you a private guide and game drive vehicle for the duration of your stay.

There’s certainly more space within the compound of the Safari Suite than a couple (or two) could ever need to sleep, work, lounge and party – not that you’d want to spend much time inside. The vast proportion of my stay was enjoyed out on the viewing deck, hovering in the warm waters of the triangular hot tub plunge pool and watching various members of the reserve’s wildlife saunter nonchalantly past. 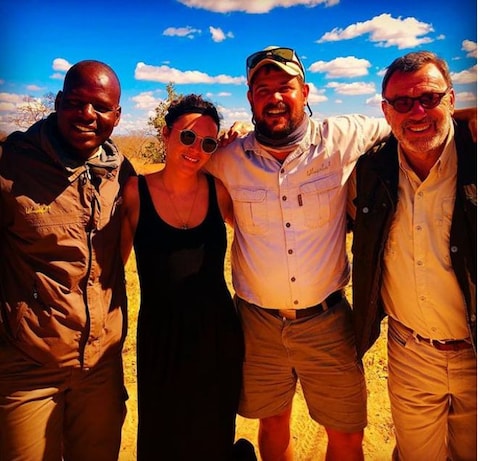 The suite’s positioning on the outskirts of Ulusaba lends it a sense of seclusion, but elsewhere on the property there’s plenty to keep you busy. Criss-cross the swaying bridges and you’ll also find a gym, two solar-heated outdoor pools, two spas, several bars and communal dining areas, and a gift shop brimming with delightful oddities.

Also worth a poke around is that wine cellar – a quaint, spiral-staircase beehive-shaped hovel that stocks hundreds of mostly South African wines; and an isolated stargazing observatory hidden out in the bush, where private dinners can be served, weather permitting, under a canopy of boastful constellations.

While you won’t find any of Virgin’s garish red branding here at Ulusaba, there are plenty of little touches that reflect the company – and Branson himself. Unusually for a safari lodge, for example, it’s home to two floodlit tennis courts. “I try to play every morning, preferably with someone better than me,” he tells me.

Then of course, the reason you came – the safari drives. Our personalised itinerary is printed on smart paper but peppered with perky, distinctly Virgin-esque comments. “Wakey wakey!” – it reads on our first morning, as we drag ourselves from our slumber at 5.30am. “It’s horrifically early,” Branson remarks, “but guests always miss the best action when they sleep in.” 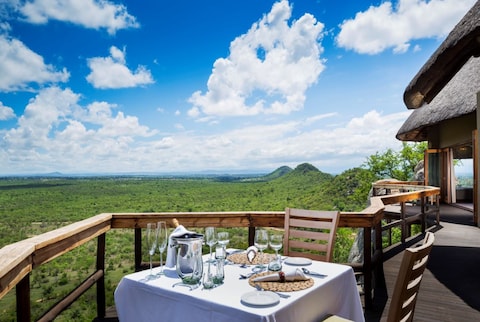 Ulusaba’s name derives from the ancient Shangaan warriors who once occupied it, and means “place of little fear”, a nod to its elevated position over the surrounding landscape. “We’ve have leopards who’ve felt safe enough to give birth right by the lodge,” my host is proud to report.

Wildlife is indeed abundant on these well-protected grounds, and sightings of the otherwise rare, elusive leopard are thus plentiful. From our own front door, we’re frequently within sneezing distance of glossy impala and doe-eyed steenboks as they pick their way across pathways, and we ticked off the Big Five on our first drive.

The only creature we miss is Branson’s favourite, the African wild dog, otherwise more whimsically known as the painted wolf. “Normally we have one or two packs on our property,” he says somewhat forlornly. “There are only a few packs left in the whole of Africa and they’re just the most exciting animal to follow. But their numbers are coming back.” 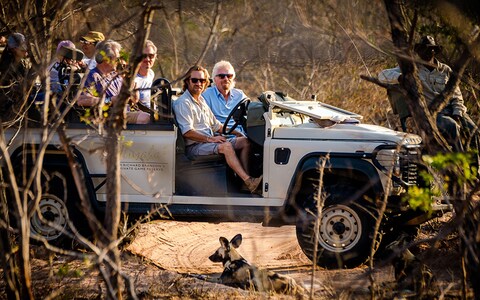 I was visiting during the southern hemisphere’s mid-winter, when the early morning drives are at their chilliest – but blankets, hot water bottles, and slightly silly-looking ponchos kept us warm. Equally, there’s nothing quite like being mere feet away from the thrashing tail and cantankerous snarl of a lion who’s woken up on the wrong side of the bed to kept one alert at dawn.

The days are warm and dry. The food and wine supplies endless (“I appear to have become fat,” my father declares upon our departure), and the staff here – at a ratio of six to every couple – delight in surprises. We were never informed where our next meal would be served, but our guide bristled with barely concealed excitement in the lead-up to every big reveal; a lavish breakfast one day served in the bush on a white tablecloth under the shade of an ancient, twisted tree; a braai dinner encircled by Roman candles to the tune of a hissing log fire on another.

For Branson, it’s clearly a special place. It’s where he was when his daughter Holly’s then-fiancé Freddie called to request her hand in marriage, and where Sam later wed his wife Isabella. It’s also home to a local community he’s been supporting with his Pride ’n Purpose foundation since 2003 – Branson earns nearly £400,000 for every public speech he gives, with all the proceeds going back into charitable pursuits like this one.

“We try to build a circle around every property we have and make sure that within that, the community are well looked after,” he says. “We have a clinic near here that’s prevented thousands of people dying from HIV, Aids and malaria, as well as 13 schools and six orphanages.” 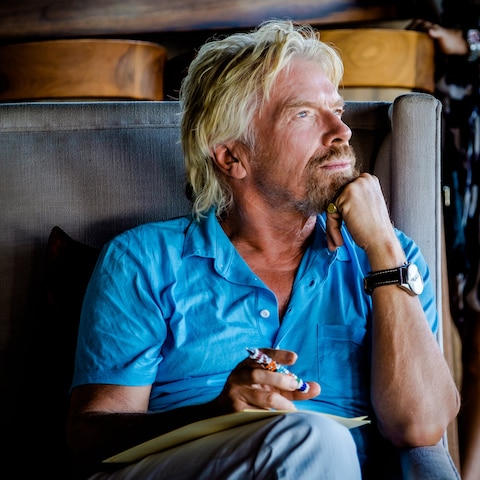 Dubbed fondly as his “Necker in the bush”, Branson acquired the land in 1994 Credit: John Armstrong Photography

By now we’re nearing the end of our final lunch, and a guest ambles over from her table across the room. She’s spotted him and wants a photo. It’s at least the 18th time this has happened over the last week, and I’m watching closely for signs of irritation. Not a flicker: he gladly obliges.

Love him or loathe him, you can’t wave off Branson’s seemingly limitless enthusiasm, and all-round willingness to please – not that he doesn’t bask the glory it brings. I glance over moments before he departs and he’s eagerly telling my father the story of the time he swapped seats with a Virgin Atlantic passenger in economy who had broken her leg, so she could fly Upper Class.

“That’s lovely, Richard,” my father tells him. “But come on, it was great publicity.”

“Ooh yeah, you bet!” Branson replies, delving into his phone to find the news coverage as his long-suffering PA steers him off to Ulusaba’s private airstrip, and I steer my dad back to that exquisite wine list.