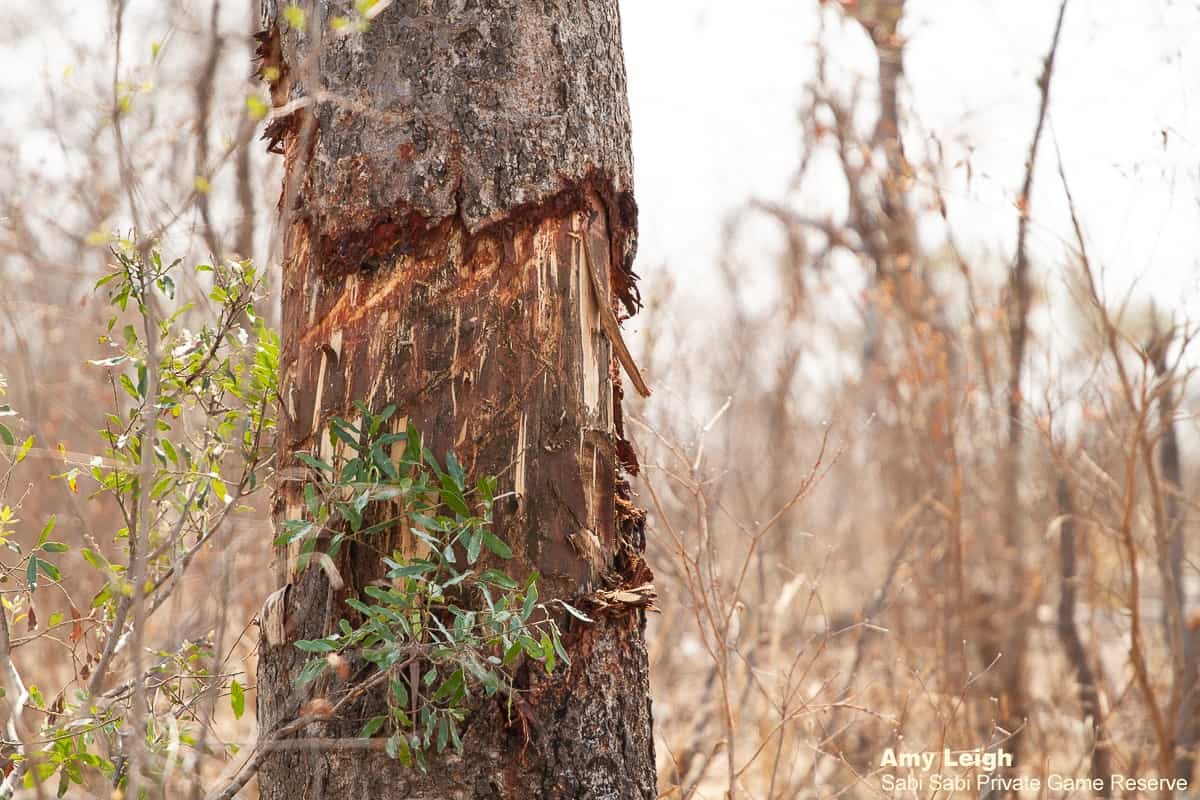 As we drive around Sabi Sabi Private Game Reserve, and so many like it, there is a constant change of vegetation – dense thickets, savanna, and the odd open grassy area. As we cross into drainage lines, we are greeted by the cool air kept in place by the dense, green riverine vegetation lining the banks of the dry riverbeds. And as you drive, or walk, the sight of dead trees scattered across the plains may catch your eye. It may seem a waste, such a large tree that took so long to reach its full potential, just withering away, but there is more to it than meets the eye… Nature is at work, and she wastes nothing.

The majority of these large trees are initially killed by the feeding activities of elephant, who tend to strip the bark to gain access to the cambium layer beneath. The cambium forms not only the growth medium for the tree, adding layer upon layer each year to the width of the base, but also the transport tissue, the connection between the food processing of the leaves and the water uptake in the roots, so it is understandable that it would be a sought-after snack.

Should the elephant strip the bark from a section of the tree, it will continue to live, if only with a scar to heal, but should the bark be removed from the entire circumference of the trunk, they are cutting off all transport of water and nutrients, a fate called “ring-barking”.

This is when the tree will start to dry out, taking on a whole new role in its environment. The bark will eventually slough off, no longer held in place by the cambium, the wood will be exposed to the feeding habits of wood-boring beetle larvae and termites.

An entire micro-ecosystem develops, not only for detritivorous arthropods which slowly start breaking down the dead plant matter, but also for birds that nest in cavities, or holes excavated in the trunk, like the Crested Barbet, or even those which build nests in the outer branches, like the Red-billed Buffalo Weaver or Tawny Eagle. Bearded Woodpeckers have resonating trees to use for their territorial knocking, which can be heard at a great distance, as they announce their presence to the world.

Epiphytes can find pockets of humus trapped in the forks of the trees, providing them with a miniature water catchment and nutritious substrate to establish themselves in, at a height where they do not have to contend with other plants for their most precious resource, sunlight.

When the tree eventually does fall over, it moves into its next phase of providing for the environment. The tangle of branches and the trunk may provide a protective barrier for any little plants or seedlings that might be trying to grow. Keeping them from being eaten or trampled until they are large enough to support themselves, this is the inspiration behind the technique for rehabilitation of disturbed soils, called “brush-packing”. From here the last portions of the tree will continue to be broken down until eventually it is returned to the soil as nutrients, creating a more nutritious substrate for the next little tree to grow in.