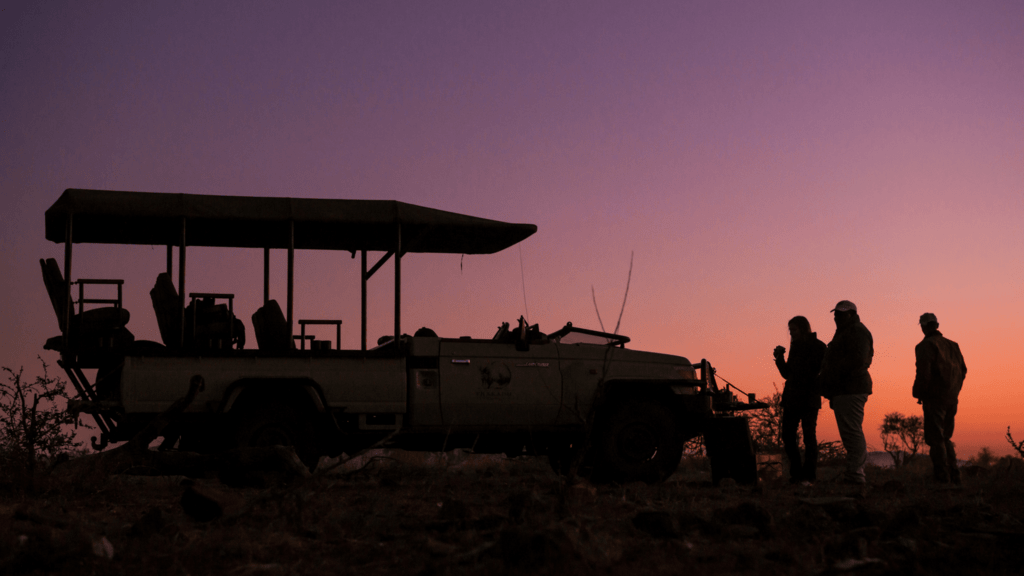 Escaping to the African bushveld is only a short drive away. Here are 10 top game reserves near Johannesburg, and what’s more, they’re all malaria free!

The Mafikeng Game Reserve conserves large populations of game from white rhinos to giraffe within 4800 hectares, and, although not a Big Five reserve, it surely has its own appeal. There are two self-catering guest houses, a tented camp and bush camps in the reserve. Mafikeng Game Reserve is approximately a three and a half hour drive from Johannesburg, so book into one of the accommodation options, kick back and relax.

Welgevonden Private Game Reserve lies in the Waterberg District of Limpopo and was established in 1993. A two and a half hour drive from Johannesburg, Welgevonden is home to over fifty mammals, including the Big Five, as well as approximately 300 bird species. There’s a restriction on vehicles allowed in the park, so it’s not as saturated as many other reserves, which allows for closer interaction with wildlife. Private vehicles aren’t allowed to self-drive within the reserve, but sunrise, sunset and evening game drives can be booked throughout the park. Accommodation includes everything from self-catering to luxury lodges.

Dinokeng Game Reserve was the first free-roaming Big Five reserve in Gauteng, and is situated on the outskirts of Pretoria. The reserve boasts over 40 lodges to choose from, whether you’re after self-catering accommodation or a more luxurious stay. And when it comes to activities, there’s loads to keep guests busy, from bush walks to game drives and hot air ballooning, take your pick.

A two-hour drive from Johannesburg, Mziki Private Game Reserve is home to three of the Big Five, over 50 species of mammals and over 300 species of birds. The mini-ranger course is great for keeping kids busy, while teaching them valuable lessons, and barge cruises allow guests to experience the bush from a different angle. What we really love is that the rates include accommodation as well as a full breakfast, light lunch, dinner and two activities per person per day.

Mabula Game Lodge is a Big Five reserve and only two hours north of Johannesburg. The lodge has 47 beautifully decorated rooms, an onsite spa, a curio shop to pick up souvenirs, a restaurant serving delicious meals and the Ndlovu Boma in the heart of it all, which is where evenings are mostly spent. Safaris are conducted in open vehicles or on horseback and thrilling crocodile feeding demonstrations can be attended.

Pilansberg National Park is a three hour drive from Johannesburg and is situated in the transition zone between the Kalahari and Lowveld, making it exceptional for spotting all kinds of wildlife. The ecology of the national park is unlike any other in the country, and almost every animal native to South Africa is found here. The park offers guests a wide range of accommodation options – from luxury lodges to camping, there’s something for everyone.

Thakadu River Camp in Madikwe Game Reserve is situated on the banks of the Marico River in the eastern section of the reserve. The tented-safari camp offers unspoiled views and top-class accommodation in 12 tented suites, each with a private viewing deck. The reserve is a three and a half hour drive from Johannesburg and is home to 66 mammal species, including the Big Five.

In the foothills of the Swartkop Mountains, near the Cradle of Humankind, lies the Heia Safari Game Reserve. Spot rhino, buffalo, hippo and over 170 species of birds while taking in the scenery on an hour and a half long game drive. And if you’d like some luxury while you’re at it, ask for a packed cooler box filled with drinks to take along.

Plumari Game Reserve is situated in Doornhoek in the Magaliesberg Region and boasts over 2000 hectares of breathtaking bushveld. Keep an eye out for leopards, hippos, white rhino, buffalo and the rich bird life. Askari Lodge is the perfect accommodation option whether travelling solo or in a group. With 48 suites, an onsite spa and breathtaking scenery, it’s luxury in the bushveld as you’ve never seen before. Guests can also look forward to two game drives a day.

The Rhino & Lion Nature Reserve is so close to the city you’ll be surprised about the amount of wildlife it houses. It’s a relatively small reserve but has much to explore and is the perfect day trip to take from the city. Home to the Big Five as well as many other endangered species, the reserve also boasts rustic chalets and lodges offering guests everything to completely unwind and relax. Feed giraffes at the Neck & Deck Cafe or visit one of the other five eateries in between self-driving through the park.